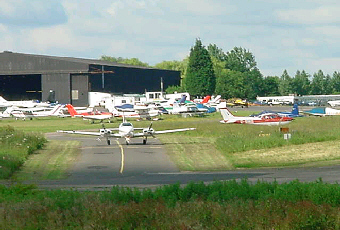 The EACC meets twice yearly, and its function is to act as a liaison between the aerodrome management, aerodrome users and the local neighbourhood. Their remit covers the Elstree Aerodrome Air Traffic Zone (ATZ). This is a cylindrically shaped area with a diameter of 5 miles centred on the Aerodrome, and a height of 2000 ft above the runway. Aircraft above 2000ft above the ATZ are normally transiting aircraft en-route to another airport. Clearly, the main concern of the local neighbourhood is aircraft noise. Because of the nature of aircraft movements (both fixed wing aeroplanes and helicopters) there is considerably more noise associated with aircraft taking off from the aerodrome (when the aircraft engines are operating at full power) than from landing aircraft (when the engines are likely to be idling). This means that populations close to departing aircraft will be subjected to much more noise than arriving aircraft. Aircraft normally take off into wind, and the predominant wind direction in the UK is from the west.

The aerodrome management have gone to great lengths to try to minimise the noise impact in various ways. Fixed wing aircraft in particular, fly in a ‘race track’ type of pattern around the aerodrome, at a height of 1000 feet above ground level. This is called ‘the circuit’ and should normally be within the ATZ and under the control of the aerodrome air traffic controllers. The purpose of this is to provide a safe separation of both landing and departing aircraft, and those aircraft in the circuit. The Elstree circuit has been extended so that, in the main, it does not overfly significant conurbations. The circuit direction is changed once daily at 2pm so that residences to the north or south of the runway are not subjected to aircraft noise all day long. The maximum number of aircraft in the circuit is limited to 3 aircraft

The aerodromes overall activity level is down 27% compared to a similar 6 month period 2019/2020 (October-March). The aerodrome management has reduced the number of aircraft allowed to be in the circuit and this has subsequently reduced the overall number of local fixed wing flights.

During this same period fixed wing movements have decreased by 31% due to a reduction in private pilot training flights as part of CV19 prevention measures. However, helicopter movements increased by 18%. This was related to professional training courses from a new training company based at Elstree

The aerodrome management has also introduced a tracker system to be carried in training aircraft. This can be used to show whether an aircraft has strayed off track in the event of a complaint. An attempt was made to raise the circuit height by 200 feet but unfortunately permission, to date, has not been forthcoming from the Civil Aviation Authority because of the proximity of Elstree to passenger airliners leaving and arriving from or to London Heathrow Airport. Complaints can be made to the aerodrome. Residents who feel they have a genuine complaint about either fixed-wing aircraft of helicopters can phone the control tower on 020 8593 7480. If the tower is busy a message can be left on 020 8905 2138, or by fax on 020 8207 3691. It would be helpful, if when making a complaint, the complainant could give the aircrafts registration number. Valid complaints are that the aircraft’s flight path is significantly outside the published circuit pattern see ( EACC-Guide-v3-11-Feb-18) , and / or the aircraft is too low (below 1000ft when not taking off or landing). Please remember that the air traffic controllers have a difficult and stressful job maintaining aircraft safety (including that of Police and Air-Ambulance helicopters in the vicinity of Elstree. If complaints are made, they should be made concisely and politely.